Our journey to stability, quality and performance excellence: ICTBroadcast version 3.0 to 3.4

ICTBroadcast’s journey of professionalism, stability, and excellence has some remarkable achievements. In this post, we have highlighted some of those achievements from version 3.0 to version 3.4. That journey is not over yet and we are focused on our mission to become leading broadcasting software in the telecommunication sector. Some of the highlighted features listed in this post are IVR campaign, Advanced graphical reporting, Load balancing, and fail-over support, REST APIs, Appointment reminder, resource management GUI, RPM for CentOS 6. x, GUI installation, System-wide configuration, and many more. 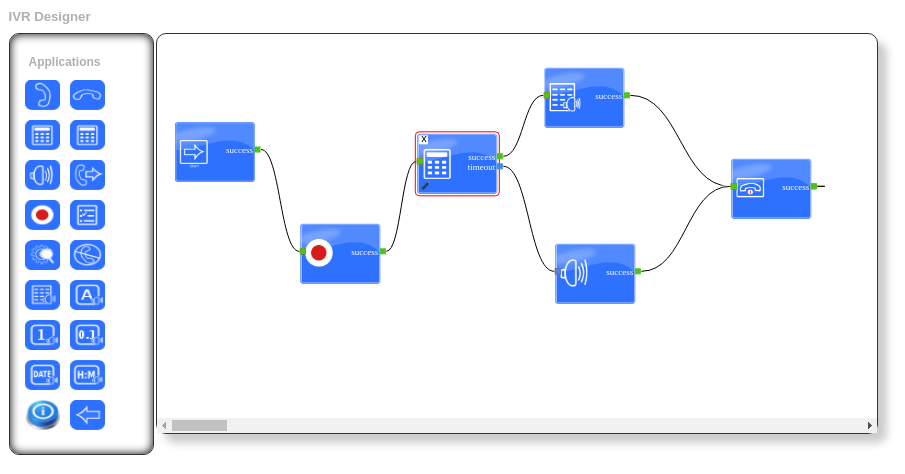 ICTBroadcast has a very powerful feature of real-time graphical reports. These reports can be found in summarized form as well as a detailed form of the reports with statistics and charts. 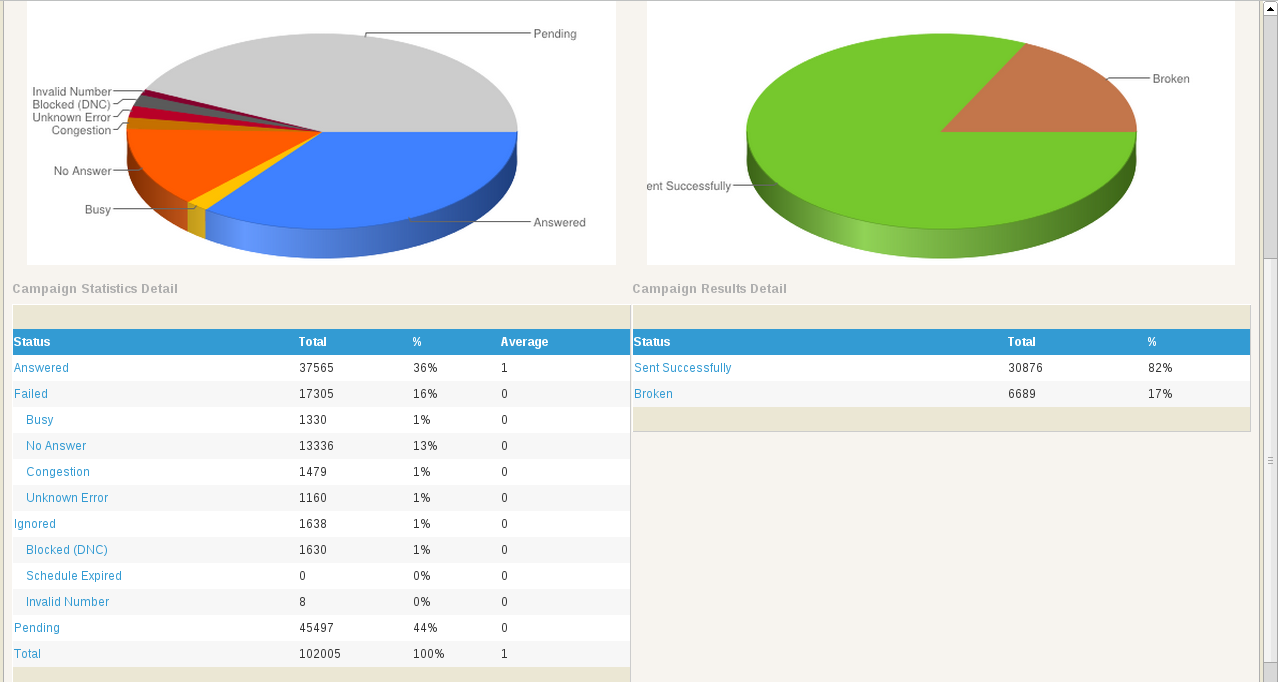 ICTBroadcast has integrated RabbitMQ for Load Balancing over multiple Asterisk nodes. Now one campaign can span multiple nodes and can achieve throughput of thousands of concurrent channels at a time. 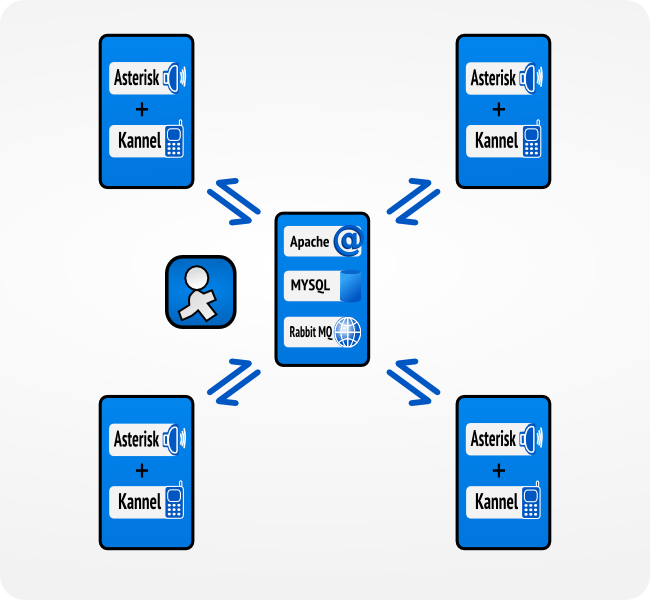 REST APIs allow ICTBroadcast to be integrated with any application e.g. External Call center, Billing application, or web portal. REST APIs can be used in a variety of ways, from showing campaign statistics on the web page, to creating new users through a function call. 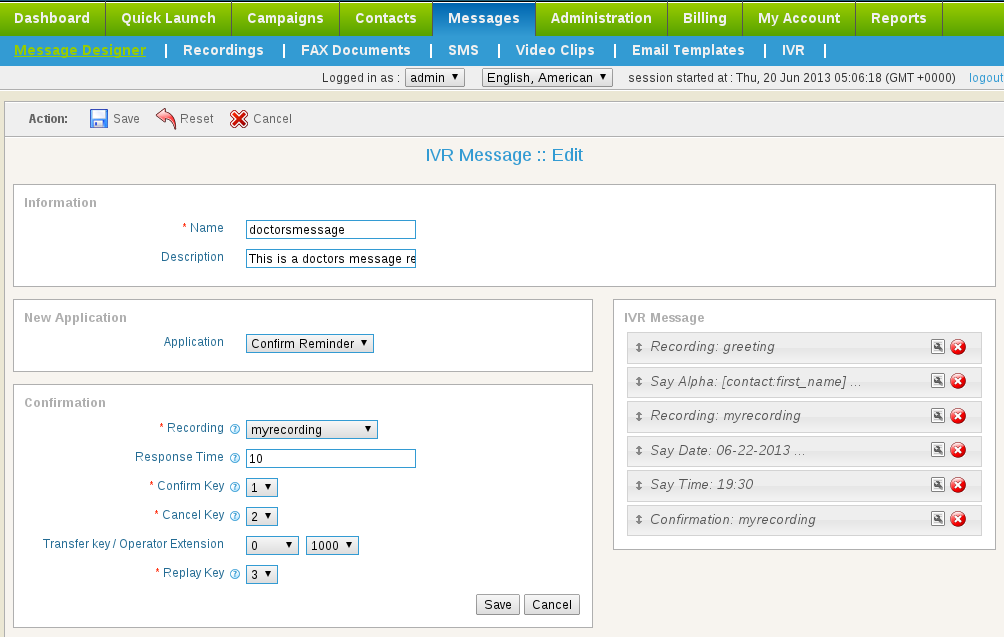 User Resource management interface allows setting time slots and weekdays for the user to run a campaign. This feature enables time-based restriction to start a campaign and can be extended in the future to include more resource management features. 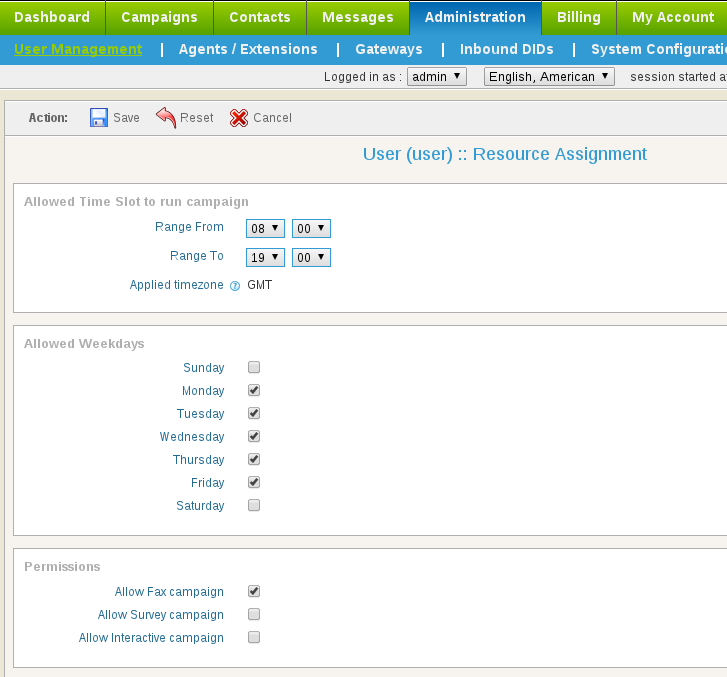 RPM release of ICTBroadcast CentOS 6. x is provided and can be downloaded from the ICTBroadcast website. Also, easy to install step-by-step instructions are provided for the web-based GUI interface.

Now administrators of ICTBroadcast can configure settings of Answering Machine Detection (AMD) according to their needs. Admin can tweak settings accordingly based on their user’s scenarios for voice broadcasting, voice mail and fax blasting. 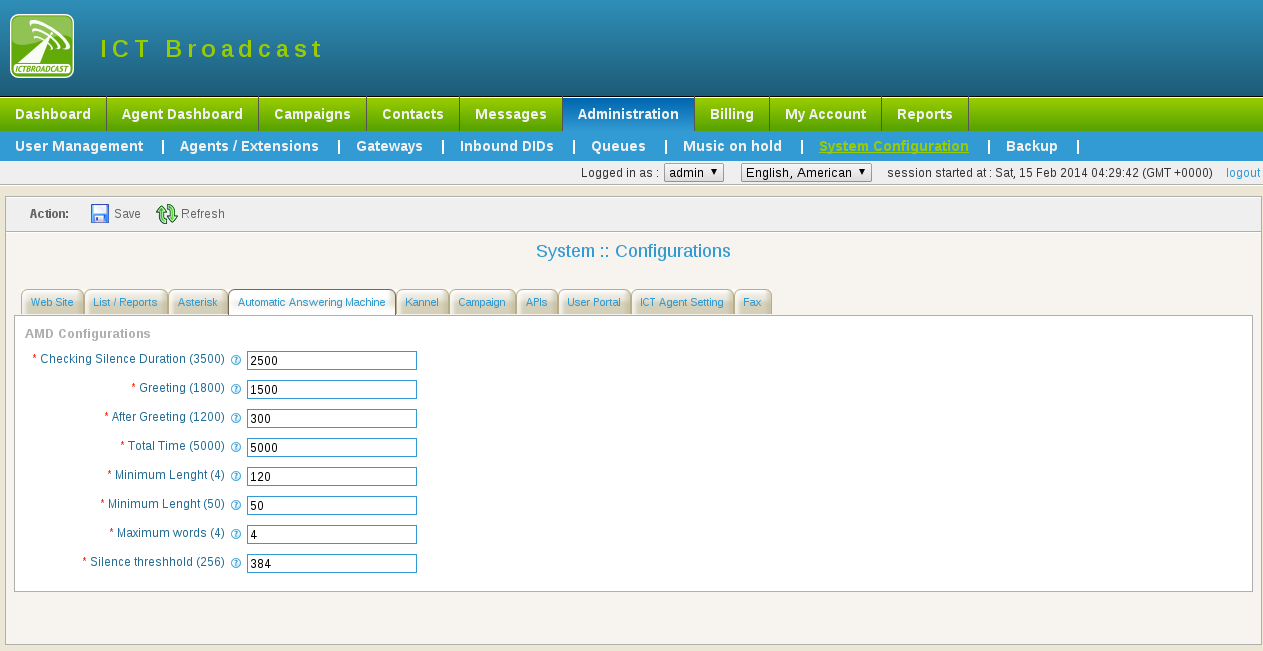 System Configuration allows Admin to manage the behavior and performance of the overall ICTBroadcast system. It allows Advanced Users to configure Campaigns, Forms, and Servers. 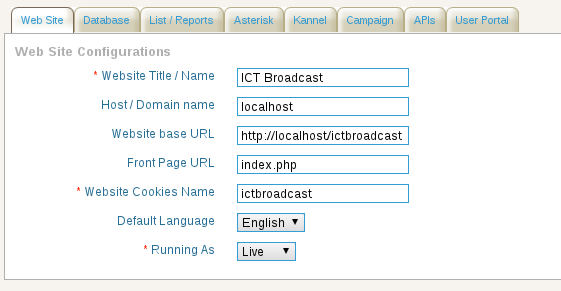 This new feature allows administrators to test the trunk immediately without creating any campaign. Once configuring a trunk is completed, the admin can click on the test trunk link. Admin can select which kind of service he/she is interested to test, for example, voice, fax, SMS, email, and video. After that, they can Immediately write the phone number (or email) where the admin wants to send the test message to go.

ICTBroadcast now offers a significantly more Advanced Campaign Management System. Users can stop or start a campaign at any time, can modify a campaign in real-time, and can increase or decrease the number of concurrent channels, simply and conveniently from the easy-to-use Dashboard. 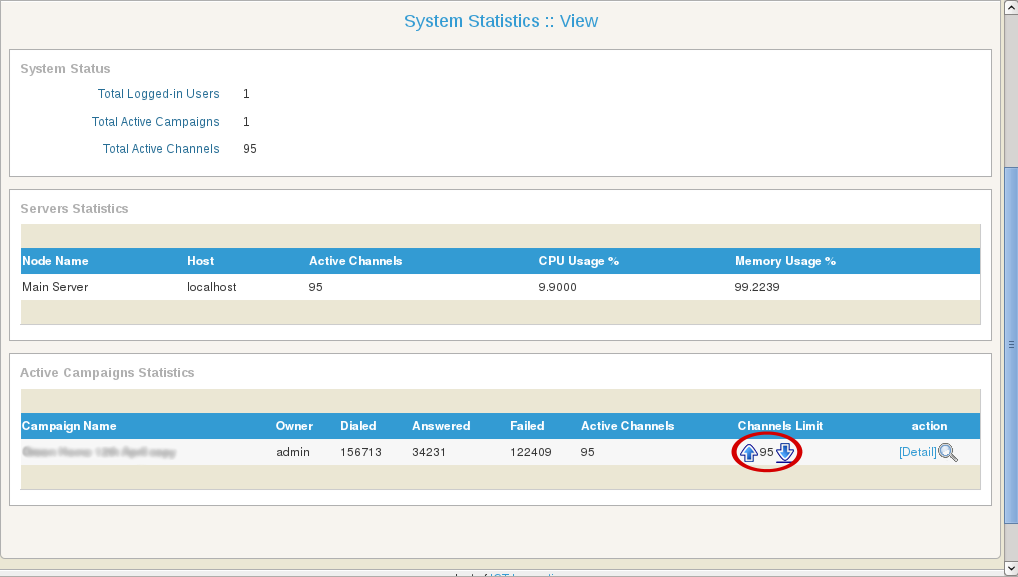 IVR Reporting for AMD and DNC

IVR reports for AMD and DNC are interactive and informative. The new version of ICTBroadcast has added AMD and DNC reporting for IVR campaigns. 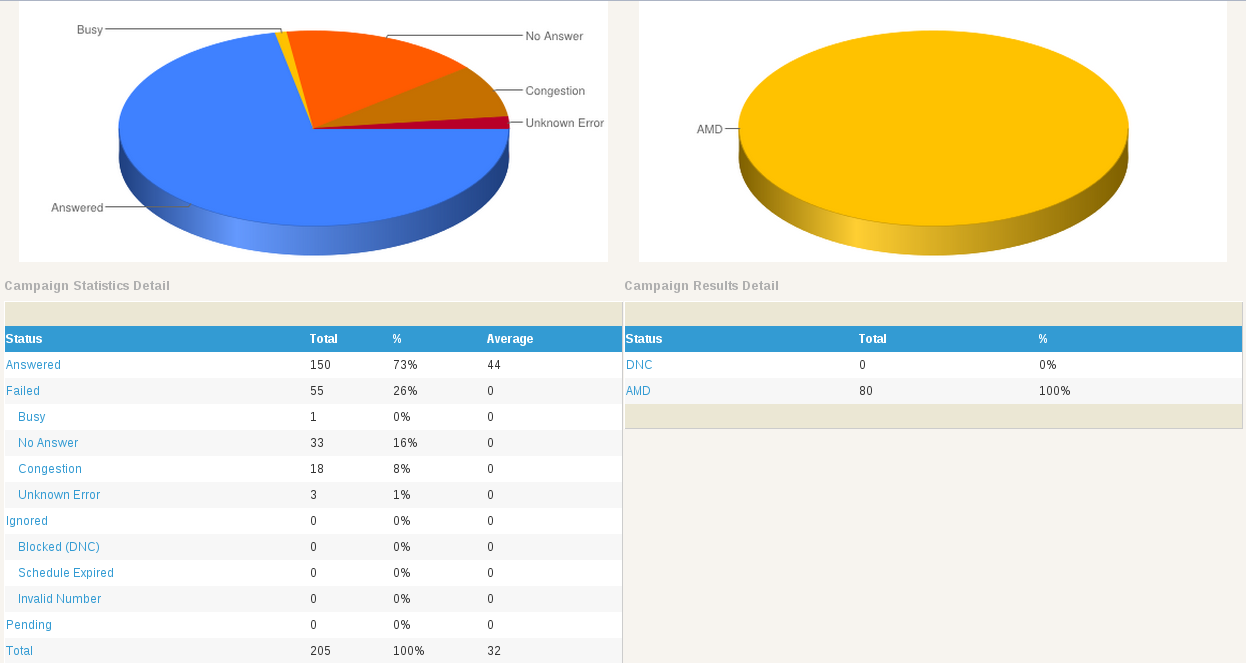 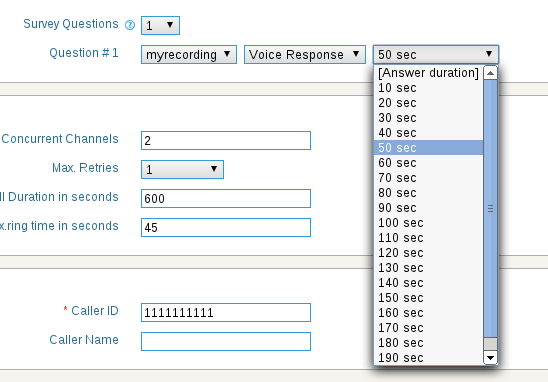 Now ICTBroadcast users can view call status, call detail report, media report. Call detail report will show when a call is placed, when it is received and when the call is completed. It will also show much a particular call cost. 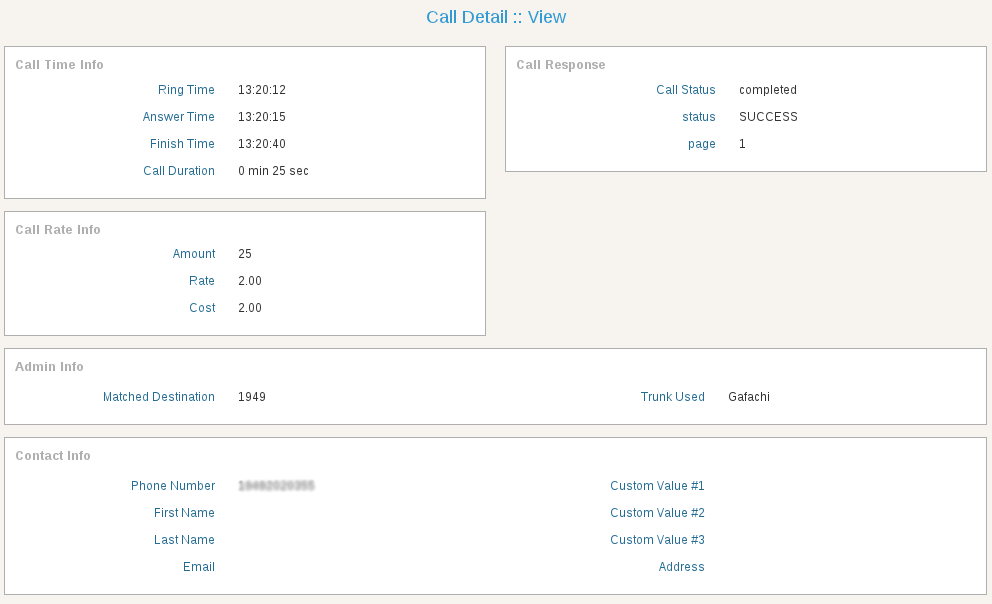