What is Automatic Phone Survey

The Automated Phone Survey is voice call based survey that empowers you to deliver interactive voice response survey questions  through a cloud-based platform.

Automatic Phone Surveys utilize voice communication to conduct online surveys & polls, receiving responses in  cloud-based platforms. Automated Phone Survey allows us to record voice messages and create campaigns to collect survey responses over the telephone asking recipients a series of questions and creating a variety of reports based on the survey results.

A customer survey would be an ideal way for businesses to gather, evaluate, and take action on customer feedback. Customer’s voice affects every area and department within a company in order to solve customer concerns or to meet customer requirements. The good news is that it affects the whole company.

Automated Phone Survey is a web-based survey tool with questionnaire features. A voice call  survey and questionnaire can be created and taken anytime and anywhere. There is no limit to the number of surveys you can create. The automated phone surveys can be customized to meet the needs of any organization. Automated Phone surveys are a  great tool for customer satisfaction surveys and telephone polling. By integrating ASR in Automated Phone Survey Software, you can record results in text instead of audio.

It is extremely important to conduct voice surveys in order to gain insights into customers and understand their perspectives. Voice surveys will help businesses increase customer satisfaction and improve the overall customer experience. You can retain customers by using voice surveys and control negative customer reviews at the same time.

An automated speech recognition (ASR) system lets users speak instead of typing numbers on a keypad to input data into information systems. Essentially, this is used for delivering information and forwarding incoming calls. The ASR algorithm converts audio files into text. Due to the analog nature of the audio, the digitized version is complex to store.

In ICTBroadcast, there are two types of Automated Phone Survey Campaigns:

Any outbound call-based survey that starts with a list of telephone/mobile numbers falls under the category of mobile/phone surveys.

How Does Automated Survey Campaign Work?

Survey campaigns can be created with ICTBroadcast Auto Dialer software for telephone surveys and polls. Automated dialers use a telephone keypad to ask a series of questions to a list of numbers. This software automatically dials numbers with this software. The ICTBroadcast voice-recording features allow you to plan when to call, record your questions, and run a campaign. Your survey campaign can be viewed as a graph and a report, as well as the recorded responses of your prospects can be examined. 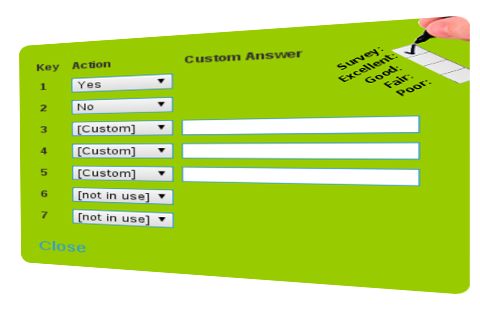 The outbound calling-based survey includes any mobile/phone survey that begins with a list of telephone/mobile numbers.

ICTBroadcast Auto Dialer software has a survey campaign for telephone surveys and polls. This auto dialer software automatically dials a list of numbers and asks them a set of questions that they can respond to, by using their telephone keypad. You can schedule when to make calls, record your questions using ICTBroadcast voice recording features, and run a campaign. You can view graphical charts and reports for your survey campaign and analyze recorded responses from your prospects. 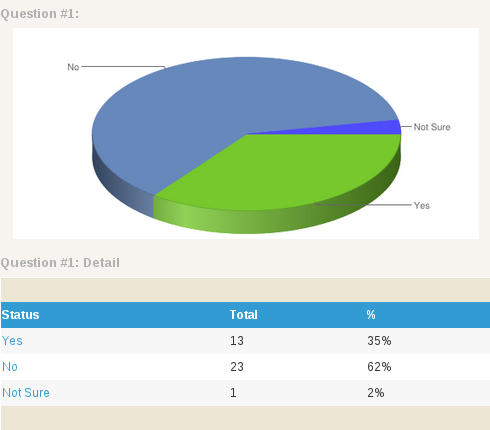 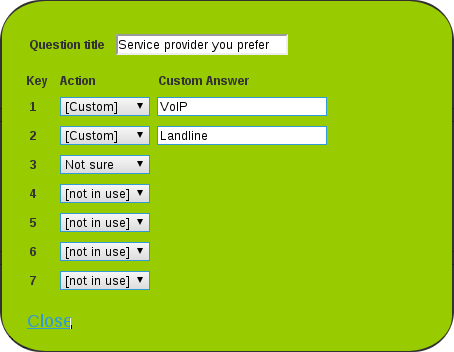 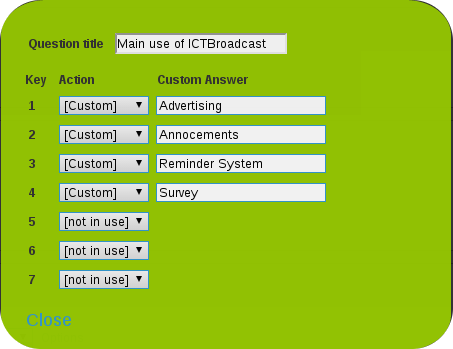 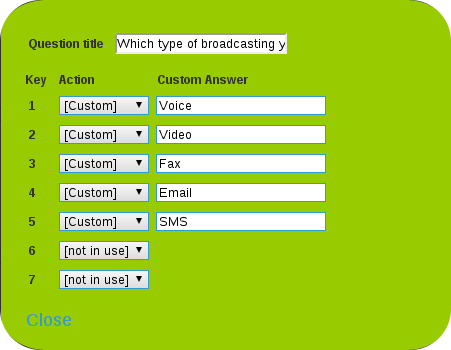 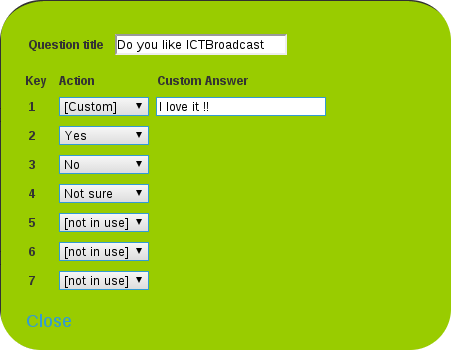 Summarized results of Questions 1 and 2:

Summarized results of Questions 3 and 4:

Clicking on any of the result links will show a detailed report of that question options. Click here to read more about the survey campaign.

How many Questions add in a Single Survey Campaign?

Click here to watch video tutorials, how to create a survey campaign.